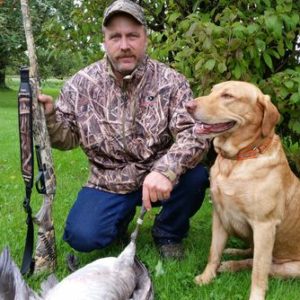 The knife maker pictured with his red lab “Hank”.  Shawn is the son of Richard and is Blaine’s dad.

He grew up working as a framing contractor with his dad, cleaned up job sites after work, and took over Dick’s farrier route on the weekends. Shawn shared his dad’s passion for running hounds, Dick preferred Black and Tans but Shawn liked Blue ticks. Most weekend nights were spent coon and hoghunting. After High School he joined the United States Air Force and was a Security Policeman stationed in Grand Forks ND and Clear Ak where he met his wife Jana.  Soon after they had a son and named him Blaine. After the military Shawn started rodeoing a little bit but it wasn’t paying the bills and a recession limited construction.  Someone told him the Polk County Sheriff’s Office was hiring and Shawn replied, “So”. The next day he started the application process and promised Sheriff Judd, then Major Judd, he would stop rough stock  and started roping. The roping was interrupted when his daughter Toni came along and took his horse. Shawn recently retired as a Sergeant after a 25 year career. He did 8 years on E.R.T., now called SWAT, he competed on a team in 5 world SWAT competitions with two overall second place finishes.   Shawn was awarded a Medal of Honor, 3 Meritorious service Medals, and multiple times Deputy of the Year during his career. Prior to the end of his law enforcement career he and Blaine started making knives with a desire to produce the best quality knife possible.   Knife making is his full time job now.